Why is the Jamesport Meeting House so important? 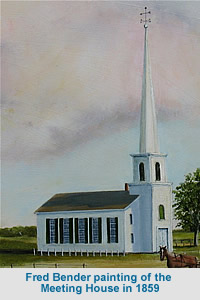 We didn’t want to lose our most important historic landmark. We’re sure you didn’t either, but didn’t know what to do or how to help. The Jamesport Meeting House is the most significant historic structure in the town of Riverhead. It is not only the oldest building in Riverhead, but is also the oldest church or public building on the East End of Long Island. It is a remarkable example of the community coming together for a public purpose. Indeed, it is where Riverhead first came together. At the time of its construction in 1731, every known family living in what is now Riverhead Town – except for the jail keeper – contributed in one way or another. These were truly the town’s pioneers. And, through them, this ancient meeting house offers a direct connection with Riverhead’s earliest days and its Puritan heritage.

Somehow this remarkable building has survived when all the other early churches in the area have been replaced, often several times, over the centuries. The Jamesport Meeting House has been modified and altered, most significantly in 1859 when it was enlarged and a steeple was added to the original simple Puritan structure. It has long ceased to be the only church in Riverhead Town, but it is still – 286 years later – the centerpiece of the Jamesport community and the centerpiece of the Jamesport Hamlet Historic District created in 2006 by the Town Board and an individually designated town landmark – and since 2009 is listed on the National Register of Historic Places.

And, now the community has come together again to save this venerable building – just as it did in 1731 to build it. Community members formed a Preservation Trust, obtained financing from the community to purchase the building and closed on the transaction in 2008. Community members have donated their time and resources to make this possible. Community businesses have donated equipment, labor, expertise and professional services help make the acquisition possible and to start the restoration process. Much hard work lies ahead, and much money needs to be raised, but the Jamesport Meeting House is not safely back in community hands!

Click here for complete history of the Jamsport Meeting House.